This Friday (January 28) on the drive out to Gangneung myself and herself stopped by Jinbu in Pyeongchang to do a spot of ice fishing. “What”? you ask, as I asked my beloved also. Ice fishing – as in fishing for ice? Surely you can make your own if you’re that desperate for a gin and tonic my dear, I chuckled. This exercise could have potential if one was in a desert or somewhere hot, but travel experts will know that Korea is not hot in the winter, and as we drove through the mountains and saw all the signs for Pyeongchang 2018, I began to realise that there was something else to this ice fishing.

A hole in the ice

We pulled off the expressway and drove through the foot and mouth disease screening devices and then followed the signs of a snowman holding a fish. These lead us down to a river where there were plenty of large tents and parking ajoshis waving their orange batons in some direction or another in effort to keep warm – that’s the only reason I could see for the waving as they didn’t need to tell me where to go, straight-on being the only viable direction.

Herself on the way to the ice. Note: not wearing high healed footwear like several of the women on the ice that day!

After we parked, we walked in and bought our rods and rented a tent – yes, a tent – we then walked/skidded down to the river. I was expecting some apocalyptic scene of a river full of icebergs (a bit like that scene from the Satanic Verses when Allie Cone is walking beside the Thames in London), but un/fortunately this wasn’t the case. In fact, it was nothing like it at all.

The river had been dammed at one end and was completely frozen over. Officialdom had divided this big ice field into three sections. The first section was a large ice rink where people were skating or sliding around in that carefree fashion I’ve never embellished for fear of having a sore arse. The other two sections of the ice were for fishing.

Ice fishing, I learned, was fishing in the ice, as in where you drill a hole into the ice and drop a line down and hope that something will get the idea that what you’ve left at the end of the line is edible. It being a ‘festival’ there were already a lot of people out on the ice and we passed a few people on their way back with what looked like decent sized fish in their hands.

I found out that this would be far from the romantic Eskimo experience I wished for. The majority of the fish are farmed and released every morning – after being stuffed full of fish food no doubt – for the hopeful fisher folk arriving eagerly from the big smoke, aka myself and herself.

Myself and some tents

Down on the ice there must have been as many as three hundred little tents or wind shelters, each with a pair of holes bored in the ice and a pair of stools to sit down while you waited for something to bite. We found ourselves a spot and settled in for the experience.

As you’ve probably guessed from this post, so far I’ve been expecting a lot, and by a lot I mean everything immediately as I want it, otherwise it’s shite. Now I might be aiming my sights a little high but certainly not completely unreasonably. To say that my initial disappointment was excessive would be a lie. We didn’t really have much luck in the first five minutes, and I underestimated how cold it actually was. Fortunately we did rent a tent which kept us relatively warm, although it was unfortunate that yours truly is about as agile as a lamp-post and if I said I struggled getting in, I would be understating things a little. Herself, all 5’2 of her, needless to say had no trouble.

Herself in the tent.

After around thirty minutes we packed up our stuff and went and got lunch. I suppose we were lucky that we weren’t out in a boat.

It being a trout ice fishing festival, there was trout to beat the band in every restaurant. Considering we felt like our nipples would drop off if another gust of wind hit us we went straight for the first place we saw – this wasn’t the first festival in Korea that we’ve gone to and we knew well that every restaurant, and I mean every single restaurant within the confines of the festivaling area, sold the same thing. So we were pretty sure that we weren’t missing out by not shopping around. 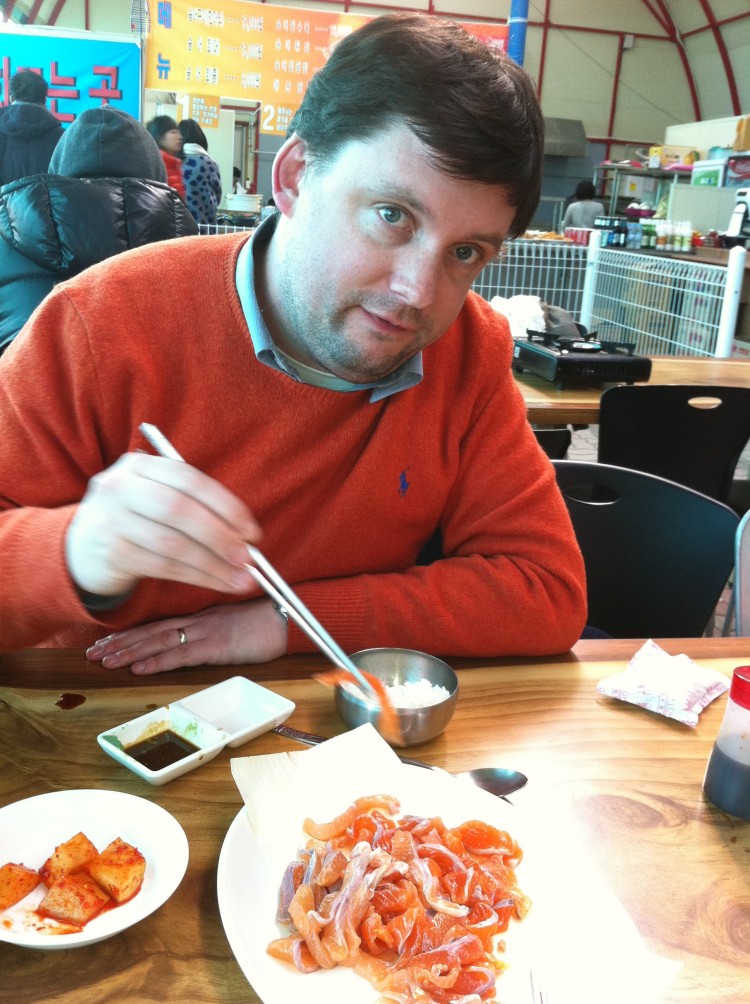 Anyway, on the menu? Trout 회 (that’s slices of raw trout) and spicy soup from the leftover bones. Mmmmmm, and this was extra mmmmmm. I don’t know why but it tasted good enough to encourage us to get back out as soon as possible and catch ourselves some wild farmed trout.

Don’t ask me how long we spent on the ice, but it was a few hours. Guess how many fish we caught! An epic zero! Diddly squat! Zip! Why? Because it’s a scam, that’s why. Allow me to offer an explanation.

The people who live in this town are obviously very smart, or at least smarter than the likes of us who dream of romantic countryside adventures fishing through the ice like our forefathers did, and our children’s children will pay to do in the future. I reckon that these people who run it know exactly what the likes of me wants and they give you an experience relatively close to it. I reckon that they intermittently let out about fifty fish a day and all these fish get caught throughout the day. So as you’re about to run out of confidence a person catches a big whopper of a fish that you’d do well to catch in the wild even if you knew what you were doing. As many clueless fishermen together as possible creates a complete lack of hopelessness – if you don’t know what to expect how can you expect anything?

As soon as you’re doubting the existence of the fish, nearby one pops out to the amazement of all concerned. You realise that maybe there are some fish under the ice, some – it’s almost as if they have doubt scanners set up in your tent and plan where the fish are going to come up!

Now, while I don’t have much to back up this theory other than my own cynicism, there’s a fair bit of circumstantial evidence which points fingers at the legitimacy of this festival. Looking out on the river was a massive fifteen storey Humansia apartment building, that stood out a bit too much, and then the river was lined with very elaborate looking pensions – have you ever seen the episode of Father Ted with the sheep contest and the fellas who are being bribed are wearing fur coats and gold crowns? That’s what it feels like – one big Humansia crown.

Those Humansia apartments... oh, they're tents in the foreground in case you're confused!

The town is obviously cleaning up from the festival because the place is tiny and you wouldn’t notice it even if you got stuck there for a year – just a mountain town that supports the farming community around it. I don’t think many farmers live in the Humansia apartments. If you think about it, it’s 30,000 a day for the tent, and multiply that by around 300 plus a few that come and go throughout the day, you’re looking at 10 million won a day for the tents alone. Nice work if you can get it, right?

I suppose I should reflect a little more humbly and seriously on this for a minute, and give a more realistic assessment of this festival and so many like it: these festivals are the lifeblood of rural Korea.

When you see how much a person pays for an apartment in Seoul and compare it with the amount of money available in the countryside, which relies mostly on agriculture, this is a comparison of two completely different worlds. When I complained about the organisers scamming me into coming here for a genuine experience, I suppose I should really say, why not? I know I would if I were in their boots. 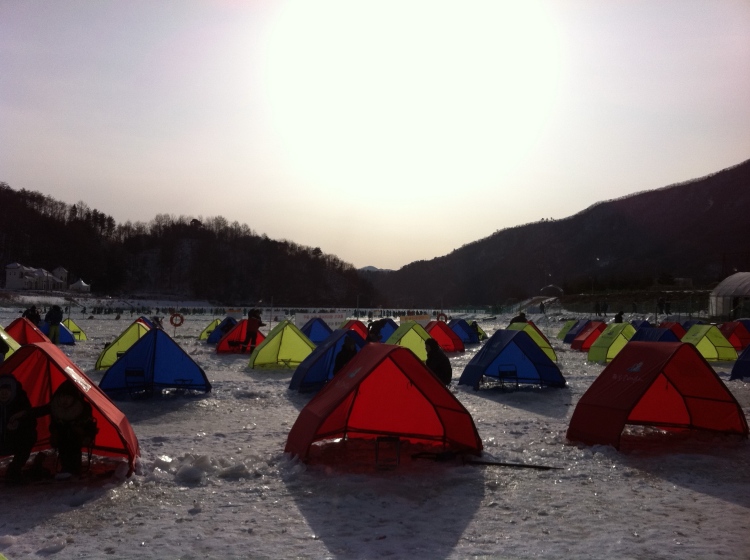 The sun going down at the Jinbu Ice Fishing Festival

I can’t imagine how much Jinbu relies on the ice fishing festival, but I’m pretty sure that it gives the people the energy to go on through the dark, dry and very cold winter. This energy has had to be redirected from the cities, much like the cities have directed all the people from towns like Jinbu, their way.

One thought on “Empty Hooks?”