So, I was bored. I was sitting around thinking how the internet consumes me daily – here, twitter, newspapers, videos, information, contact with friends and family. I thought to myself, surely I have some sort of an online profile or presence. I write a lot and most of it goes on the internet, so why not? I don’t mean like a falsified facebook page or fancified linkedin account for work. I mean something like a digital footprint of my own actions on the internet.

So, I googled myself.

I had hoped that I would find a wide range of links to my writing here and to the magazines and blogs that I contribute to, but this was not the case. Conor O’Reilly is a fairly popular name it appears. O’Reilly isn’t the most common name in Ireland but it is definitely popular enough to include several thousand, if not tens or hundreds of thousands. And, as for Conor?

When I was growing up I was one of the few Conors I knew. In fact, the whole way through secondary school and through university I think I met around four Conors. Then, it seemed to happen over night, as soon as I left school all these mothers started to call their sons Conor. I noticed this even more after leaving Korea and coming back to Ireland, when I’d constantly hear some mammy with a relatively young (and sexy) voice calling out ‘Conor, Conor, over here Conor’. Around I’d spin to see a little snot moustached three year old charging around making shit of whatever shop I was in. The joy.

Anyway, I’ve gotten over the trauma of these revelations.

So what did my Googling reveal? Snot moustached three year-olds or me, me and more me? Well…

Aside from the expected Linkedin and Facebook profiles, I share my name with exalted academia. But my name doesn’t even manage to feature high on the first search page from Google.

Twitter and Flickr soon came to my rescue, but not a whisper of all the hard work put in to these humble pages. Apparently there’s a composer with the same name as mine, and he might be relatively famous if you consider how regularly his name comes up, which is more times than mine, which means he must be, like, as famous as God or someone like that.

It gets interesting from here. A few pictures of my fellow Conors, a Google+ account (not mine), and also news about Garda Sergent Conor O’Reilly who was apparently making life very difficult for some protesters in the west of Ireland who had complaints about Shell drilling for oil in the Irish sea. But that’s about it, nothing from me. My lack of popularity at this stage is starting to bother me. Maybe I should consider doing something infamous…

Finally, I appear on the internet in my artistic personna! A poem I submitted to Wordlegs magazine, with a photo of me looking very happy indeed! This is more like it. Surely my internet presence will surely snowball from here. Sure, what else could possibly happen? I suppose I should mention that there are more academics with the same name as me. Perhaps a sign of things to come.

After I calmed down from the excitement, further clicking revealed that…

I also do wedding photography. Contact me today for my rates. 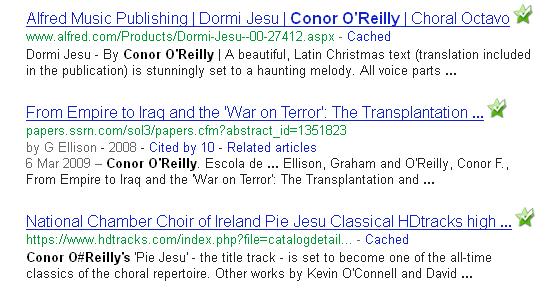 I mean, I spend a fair bit of time on the internet wasting my time, but it is now clear that this does not grant you large swathes of internet space. Just because I’m looking at the internet, doesn’t mean the internet is looking for me. But, I suppose that goes without saying. From here, I don’t expect to walk outside of the home for some time, save without a scarf over my head.

P.S. Perhaps the most revealing aspect of this little adventure was this, courtesy of The Urban Dictionary: 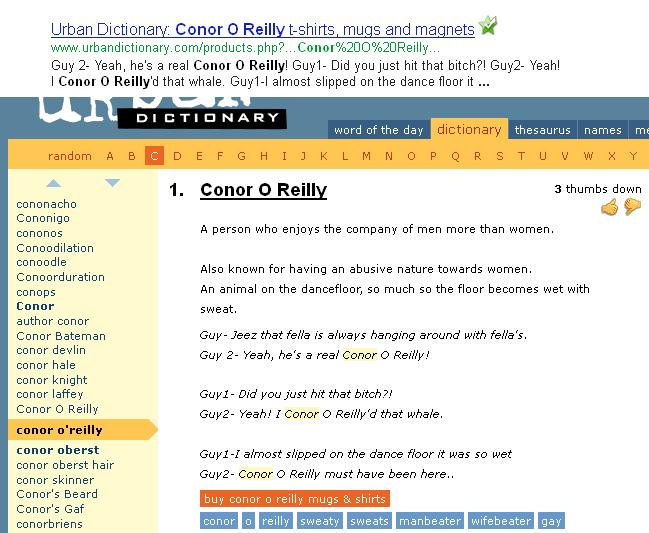 3 thoughts on “I was bored so I Googled myself…”