Korea is not afraid of honouring the unusual. With any number of festivals for all sorts of reasons throughout the year, there is definitely a culture of self praise. Suwon, where I humbly reside, is no stranger to such honorific displays, and today myself and Herself decided to visit a recently famous tourist location in the city, Mr. Toilet House.

Yes, that’s right. It is a house that was built to celebrate toilets. And why not says I? Sure, isn’t it one of those things which we shit down on all our life and never actually turn around and congratulate for the good work they do, day in, day out, all over the world. So, toilets of the world, I salute you. 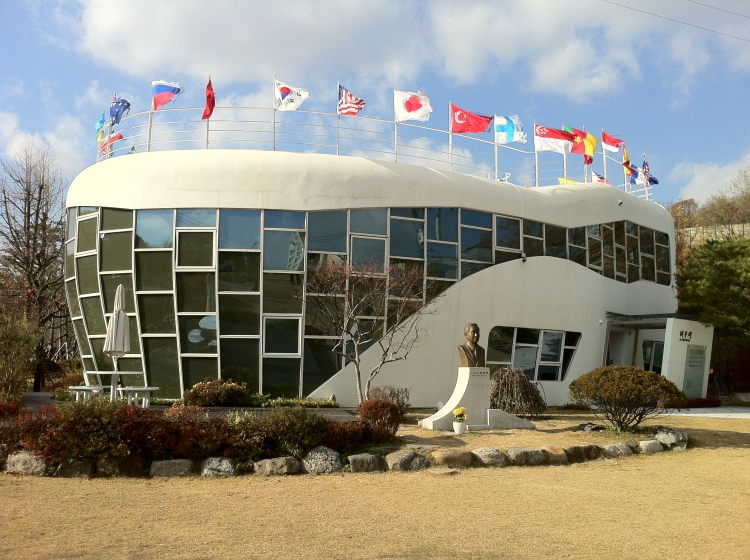 This may be a huge surprise to many, but the toilet – or at least going to it – isn’t considered as revolting a subject as it may be in the west. It’s certainly considered a sign of good health to pass regular, solid stools. Also, having to go to the toilet not long after a meal is thought as sign that healthy food was eaten. And even though that is none of anyone’s business but the shiters, informing someone that you are going for a shite, or dump, or poo, or whatever it is you call it, is not as cringeworthy as it may be tought elsewhere. If you don’t doubt me, spend 15 minutes in any public or office toilet and witness people walk in and out of the cubicles to the sounds of gas and stools passing with the same fluidity as you would expect from cars passing through a petrol station.

I forgot to mention you can also buy food, like cakes, sweets, and snacks shaped like a warm and steamy turd. Yes. Tasty.

Suwon itself may be described by some as a bit of a toilet, but that doesn’t stop the city revelling in the possession of such a fine cultural relic. Suwon City’s website even reserves a special piece of cyberspace specifically for outlining the wonders of the city’s drive to be a squatter friendly place to live.

Multilingual explanation for the droves who flock to see Mr. Toilet House.

The capital of Gyeonggi-do has even gone to the point of establishing an important project, “Making Beautiful Public Restrooms”, as well as its adaptation of the “cultural public restroom” concept – explanations on the back of postcard please – and of course one cannot forget the “Beautiful Public Restroom Tour”, or the “Cleanest Public Restroom Contest” all of which help to put Suwon on the map. I should add that these initiatives were followed up by the founding of the ”Suwon Restroom Culture Association”, a body which citizens are expected to participate in. However, the website did not define how one was supposed to actively participate in such the association, which is disappointing. Significantly, it did highlight Suwon’s importance to the world, now described as a veritable Mecca of public squatters and urinals. As a resident of Suwon, this makes me proud.

So anyway, the building on the grounds is kind of shaped like a toilet. The house or museum itself was actually built by a former mayor of Suwon who was purportedly born in a toilet, , a man by the name of Sim Jae Duck, and holds many photographs of the development and improvement of sanitation facilities in the Human City. On the ground floor are a handful of photographs of toilets in Korea over the years, and a few displays of toilet door markers from around the world, including something from Ireland (you can imagine that I was doubling over with pride at this stage). There are also some photographic memorabilia for the World Toilet Association and the Japan Korea Toilet Forum, among other notable achievements in the twentieth century history of the noble bowl.

The second floor of the building is essentially a shrine to Sim Jae Duck. He was the mayor of Suwon for a couple of terms, but some parts was more like a shrine than a museum, with his brief case, notebooks, tie pins, old ID cards, and photographs of the fella standing looking a fields and watching agricultural demonstrations, which reminded me of something I’d seen elsewhere. Did I mention there are pictures and cardboard cut-outs of him all over the place?

Outside things started getting serious as we started to encounter more toilet related extravaganzas. After passing by some buckets and chamber pots, I realised I had walked inside a large squat toilet about the size of an apartment. It was not the large sheltered seating area I had imagined it to be. Of course it was clean and not an actual squat toilet, but it took a moment for this to sink in. This toilet came equipped with its own brightly tiled novelty turd.

A nice place to relax…

There followed a number of arrangements and statues  of things like old chamber pots, toilets, and of course people going to the toilet, complete with eyes squeezed shut and brows furrowed instensely while concentrating on the job at hand. Many were quite interactive and allowed for visitors to try out the variety of toilets which have been a part of Korea over the years. Photo opportunities are a must for every visitor.

Making the most of my time in Mr. Toilet House

I reckon that this place really has to be seen to be believed, and I’m far from a travel blogger so describing it in detail may be beyond me. It is a magnificent celebration of what excreting is all about and I was laughing the whole way through our visit and Herself had to ask me to stop at least three times.

One final point; the toilet for the whole facility was undoubtedly the nicest smelling and most floral toilet I have ever experienced in my life, but why this is I can’t understand because, in my own humble and opinion, toilets are supposed to fucking stink.

So that’s my tourist plug for Human City Suwon done for now. See you on the jacks.

*For more photographs of myself and Herself’s visit to Mr Toilet House please click this link!*

6 thoughts on “Suwon: A Great Place to Shite”