I don’t profess to be an expert on much, such is my modesty. Even though I’ve lived in Korea for over nine years now and am invested in the country through family, I can’t really attest an authority on much of the country’s history. This is certainly an embarrassment as I’m supposed to be a history graduate.

When I first arrived in Korea I read Michael Breen’s The Koreans, and it was the kind of book that just seemed to give enough of everything so that, if you were curious about some other aspect of the country, you could easily be wise enough to make the wise decision on some follow up reading. I think I finished that book in 2006, if not 2005, when I first arrived here.

That’s quite a long time to spend learning about a country without reading much on it. This indeed may be a problem which much of Korea’s expatriate experts, in that we spend a lot of time here and profess to be armchair experts on the condition of being in Korea, yet we hold very little knowledge beyond a decent gogi jib and our opinions on ActiveX and Internet Explorer. I say this because this is basically me, and while I know there are plenty who know more than most, I can imagine there are plenty who know less than me.

It was in some respects an accident that I picked up Andrew Salmon’s books on the British, Australian, and indeed Scottish and Irish involvement in the Korean War. Around this time last year I was very fortunate to represent the Irish community in Korea when I laid a wreath at the unveiling of a memorial for Irish people who fell in the Korean War. Throughout the process of arranging the memorial, Andrew Salmon was a constant figure advising on the experiences of the Irish in the war, specifically the Royal Ulster Rifles, who suffered some of the highest casualties of the British and commonwealth units in the war. Throughout the process and after his first book To the Last Round was lauded as a must read.

Reading about the British involvement for me, while being Irish, brings it a little closer to home. While we are at all attempts proclaiming ourselves radically different, a commonality exists in many respects. Maybe this stems from a certain familiarity with our neighbours, one that is more realistic than a television impressed notion of Ameicanism.

I went online to check the books out, and here I found a second book of his Scorched Earth, Black Snow which I saw was from earlier in the year. So being a history graduate and knowing the importance of the period before the period we’re talking about, I decided I’d give that a read first. So I tapped away at the screen of my iPad, and before I knew it I had a digital copy downloading away.

That being said, I didn’t actually get around to reading the actual book until I was in Thailand this winter, about eight months later. So shoot me, but I’m a distracted soul, and admittedly one who really hadn’t been reading as much as I would have liked. But I think I’ve been doing better of late. Good books have helped.

After reading both of his books I contacted Andrew himself and asked him a few questions about the writing of the books. I has always interested me how authors who work full time as writers fit in the time to write a non-ficition book, and especially one on history which requires extreme levels of not only dedication but beyond meticulous research. Pick up either of his books and you will understand what I am talking about.

In an email Andrew explained that most of these books were written ‘after midnight’, and that the writing was ‘personally and professionally satisfying, but financially non-remunerative’. This is probably something that scares many away from writing books, this constraint on our time is not recuperated in our wallets – not that I’d know, I’m just saying.

Throughout both books there is extensive first hand reports from those who fought in the battles and slit trenches. From the Busan Perimeter to the heroic holding action at Pakchon in North Korea, relieving the 1st US Marine Division in Chongsin Resevoir, and the of course the slaughter and defiance from the battles along the Imjin River just to the north of Seoul, so much of these books comes from first-hand experience you cannot discount their authority. It seems at times that it’s unfortunate that there weren’t more pages in the books. 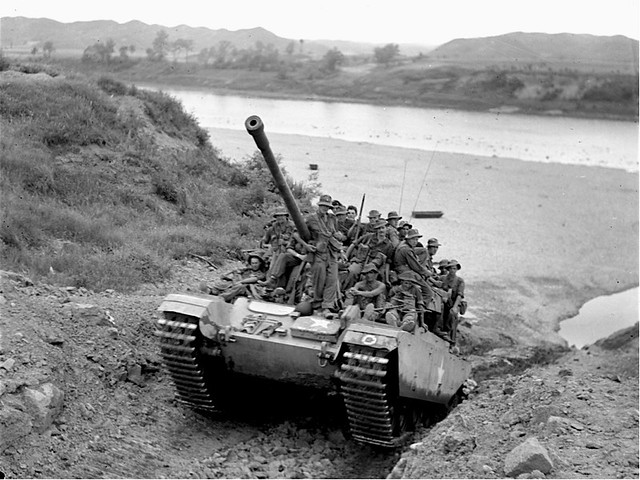 ‘I started with the regimental and veteran associations’, Andrew Salmon explained of how he made this possible, ‘the nature of these groups is that, if they trust you or like you, once you speak to Chap A, he recommends Chap B, and so on ad infinitum. I was surprised at how open most of these guys were. I think 99 percent of them had never had anyone ask them about their experiences in the “Forgotten War” and as they are now in their twilight years, they wanted to speak, to get their war on the record for posterity. Many of them volunteered material that I was initially hesitant to ask about. For example, the account of one atrocity – the murder of a Korean civilian by a soldier who simply wanted to test his rifle (told in To the Last Stand) – was told to me, without prompting, in the back of a bus, in the company of several other veterans. None of them contradicted him.  I am pretty sure these kinds of incidents stuck in their minds, and they wanted some kind of release’.

Like these couple of incidents, there are so many images and memories specific to individuals which not one person who would there would attest against. I wouldn’t say you get numbed to atrocity, but after some time you kind of stop being amazed and just accept it as a circumstance.

Of all these incidents though two much discussed ones come to mind which I couldn’t help but be frustrated or shocked by – the first was the accidental napalming of the Argyll and Sutherland Highlanders, or Jocks, which was perhaps as brutal and unfortunate an incident of friendly fire as you’ll come across, and the action of the 8th Kings Royal Irish Hussars as 29 Brigade withdrew from their Imjin defensive positions – not only was it the first time these newly touted tanks had a chance to really operate, but it was in such desperate circumstances that you had to wish they could have done more.

Of course throughout these books, it must be expressed, there is descriptions of rampant slaughter described and it is hard at times to remember that the Chinese who were mown down could have been as desperate as the men whose experiences I was reading about were. It was a time that we can be grateful to have lived after. 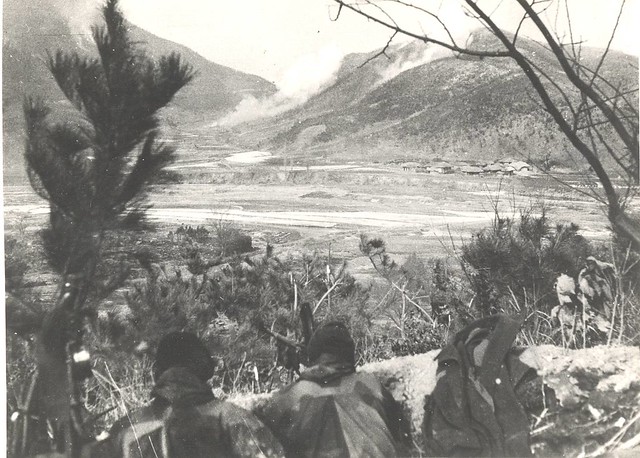 With more and more devices providing reading experiences, writers are being coerced into providing a more diverse package. I read my copy of Scorched Earth, Black Snow on my iPad, and as I read I followed 27 Brigade north with Google Maps. I tried and failed to find their positions on the Naktong bridgehead, but as they moved on to Seoul, and then North Korea and along the main highway through Sariwon, Pyongnyang, Sukchon, Anju, and of course Pakchon and on to Chongju, feeling eternally like this was going to lead to one great bloody Borodino – if only it was so glorious. You knew something was going to happen but you couldn’t really tell how or when it would, but when they captured that Chinese soldier while on patrol you knew that something was about to happen that they would have little control over.

‘I wish my publisher had added film of one of those as part of the eBook package’ Andrew said, ‘that would have given the reader a huge amount more visual material to look at, but I don’t think technology has been well-leveraged or well-deployed by traditional media managers’. For the digital age, this is the advantage that eBooks have, and it is one being leveraged by the media, just not publishing. ‘As a print journalist, I am being asked to become a photographer, a film recorder, a presenter, a film editor as well as my core task’ Andrew continued. ‘The upside is that one has to upskill. The downside is that I am not being paid more’. If we expect so much of the media, perhaps publishing will follow soon, but we shall see how high the quality will be.

And perhaps it is our expectations that are dragging so much for nothing from everything. With the internet, nobody expects to pay, and this is where our problems start. ‘The Internet is killing journalism and publishing’ Andrew continued, ‘though it has to be said, the blame for this long, slow, death really lies at the hands of the management of the newspaper and publishing industries, who have failed to come up with financial models that will guarantee the future of traditional media’. This is something that is happening, but it is slow, and expensive, and a learning process. ‘In the future, when online media has matured, we will look back on the first two decades of the 21st century as the critical, transformative period. Alas, it has been bloody; the number of working journalists has fallen horrifically. This is not good for media but – without wishing to sound alarmist – it is not good for democratic governance either.’ A stern warning indeed. 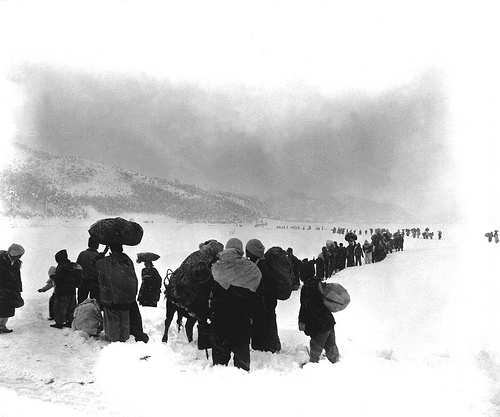 In terms of the books, I’d recommend them to anyone. Enthusiast or casual interest, these books should be read, not only because of what I have said above, but also because they have kindled an understanding and gratitude for our present situation, and made me appreciate my extended family further.

What struck me more than anything in these books was not the descriptions of war and sacrifice by foreign troops, but the images of a poor and agricultural society made destitute by the destruction wrought from the international deliberations over its territory. The people who lowered themselves so dejectedly, who fought their own demons, who fled, who stayed, who starved, but who stuck around and dug in sacrificing more to build up what is truly a remarkable miracle, 21st Century Korea.

On the reception his books have received Andrew Salmon told me this:

‘[The responses have been] universally positive: Mainstream media – including The Times, The Daily Mail, and BBC History Magazine  – have been kind. I’d add that “To the Last Round” has 130 five-star reviews on Amazon UK, which is an unusual number for a non-fiction book, and which I am particularly pleased about. The only negative review I suffered was from the writer of an expatriate magazine here in Seoul. What is most gratifying is the response from veterans, who have said: “You have captured it – this is what it was like!” One, the late Colonel Mervyn McCord, said in an Amazon review, “Anyone suffering from PTSD should not read this book – they would have a relapse.” I have also had endorsements from two “true” heroes – Derek Kinne, George Cross and Bill Speakman, Victoria Cross. That kind of response is deeply gratifying’.

Andrew Salmon’s personal blog/website is tothelastround.wordpress.com (this particular page on the site is worth particular attention in my view)

The books can be purchased online here

One thought on “Reading the Korean War”