I’ve been coming to Jumunjin in Gangwon-do as long as I’ve known Herself. She’s a local, but she hasn’t lived here since she finished highschool and moved to Seoul to go to university. Not long after we started hanging out together she sneaked me down here and we hung out at the beach in between the time she would spend with her family. It wasn’t long before we started to make regular trips here and these trips increased in frequency once I was formally introduced to her parents. Now I’d almost say I’m a local here. I don’t think too many of the real locals feel that way. 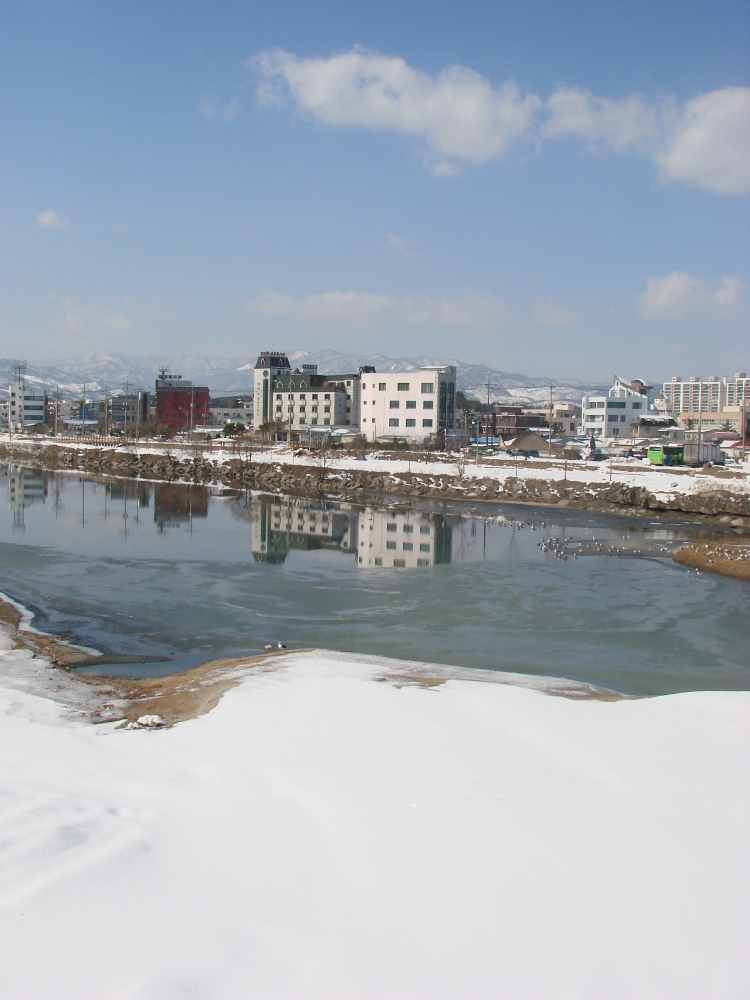 Sogum River and Jumunjin in the winter.

Not only is Jumunjin the place where we later got married, it’s also probably the place outside of Seoul we visit the most. A couple of summers ago we were almost every second or third weekend. That being said, it has been a while since we were last out here. I’d say we haven’t been here since some time last autumn, which is quite a while.

END_OF_DOCUMENT_TOKEN_TO_BE_REPLACED

I finally managed to get my camera back into a usable state. First of all, I mislaid my camera charger, so bought a new one. I reckon as soon as the new one arrived, the battery went missing. Today I charged up my camera and uploaded some of the pictures from those two trips.

On Friday night we boarded a bus in Suwon expecting hours of traffic packed in between tumults of snow. We hoped the journey would take less than five hours and, if we were lucky, the bus driver would at least leave the reading lights on, unlike the last time we took the bus.

We knew what was ahead. Korean New Year is famous for the lines of impregnable traffic on the express-way, and for the previous two days, both the weather forecast and my father-in-law had been warning us about the snow that was going to stop the world that existed around us.

It seemed that the worst traffic we would be encountering along the road would have been in Suwon as we made our way painstakingly through the Friday evening, after-work rush. It was unexplainable, so much so that we found ourselves complaining about the lack of traffic, and the lack of snow.

END_OF_DOCUMENT_TOKEN_TO_BE_REPLACED

The iconic and now disused Gangchon Station in Gangwon-do Korea, the destination of choice for weekending university students for decades. This train station was the arrival and departure point for many of these alcohol fueled weekends. Now disused and empty, the station stands waiting for who know’s what will happen to it next.

END_OF_DOCUMENT_TOKEN_TO_BE_REPLACED

A couple of weeks ago, myself, Herself, and a few friends took a weekend excursion down Chuncheon and Gapyeong in Gangwon-do. It hadn’t really been our idea to catch the autumn leaves, but fortunately we arrived right at the ideal time to really see the bright multi-coloured autumn which Korea prides itself on.