Now before you get all looney and start shouting at me that Children’s Day is in May, please remember that I am in Thailand (yeah, as if you’d forgotten) for the foreseeable future. With that confirmed, let me continue.

Yes, Thailand has a Children’s Day a lot like Korea also. For those of you unfamiliar with Children’s Day, it’s a special day where parents take their kids out and treat them to whatever they feel like treating them, I suppose. This may baffle some parents who believe their children celebrate Children’s Day every day of the year, however, in a culture which doesn’t really celebrate Christmas (except for the odd copycat effect with regards Santa Claus) Children’s Day strikes me as suitable alternative, although it pales in comparison to the general frenzy surrounding Old Saint Nick etc.

Today we headed down the the Kad Suan Kaew Shopping Mall, better known simply as Central, where we had seen some class of a childlike wonderland being erected over the past couple of weeks. Herself hopped onto the old Naver beforehand just to check and we were in luck, not only was this some huge kiddy extravaganza but throughout the mall kids got all kinds of goodies!

This being the third time we’d been to this shopping mall in four days we were glad that we were going there for a different purpose than spending loads of money on food – which we ended up doing anyway – but to give +1 a go at being spoiled – *note we believe she is spoiled everyday, and rightly so!

Too get things started, +1 got free ice-cream! 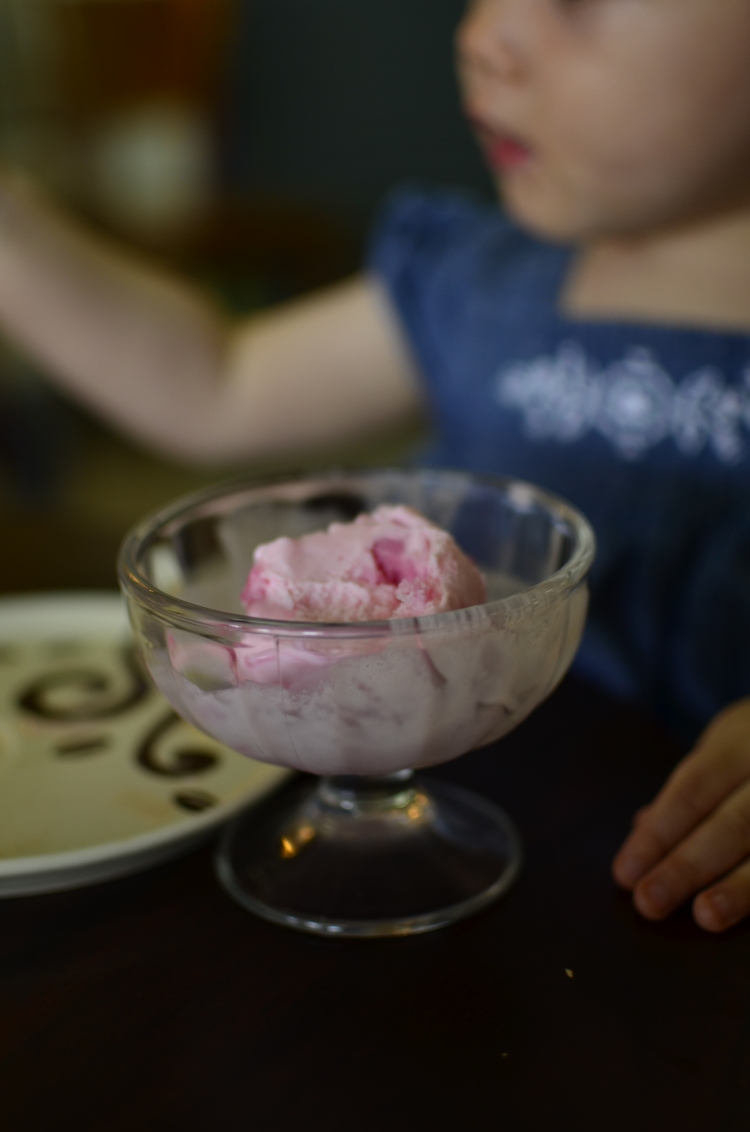 Then it was down to see the fun and activities on offer – none of which were suitable to a one year old toddler, but it was fun to watch. 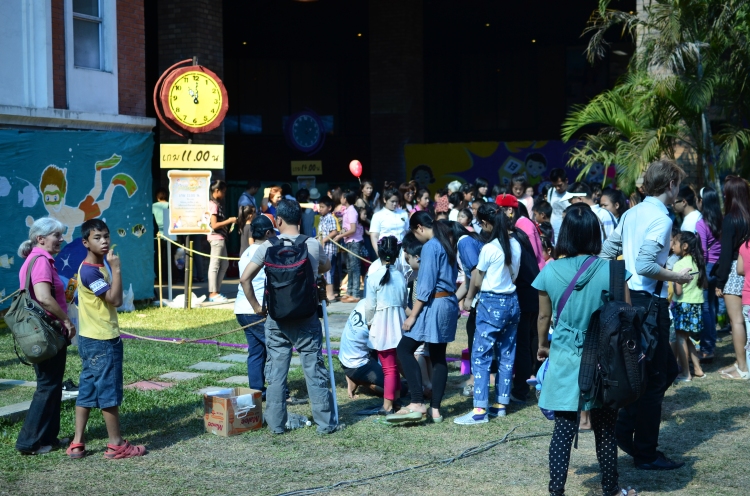 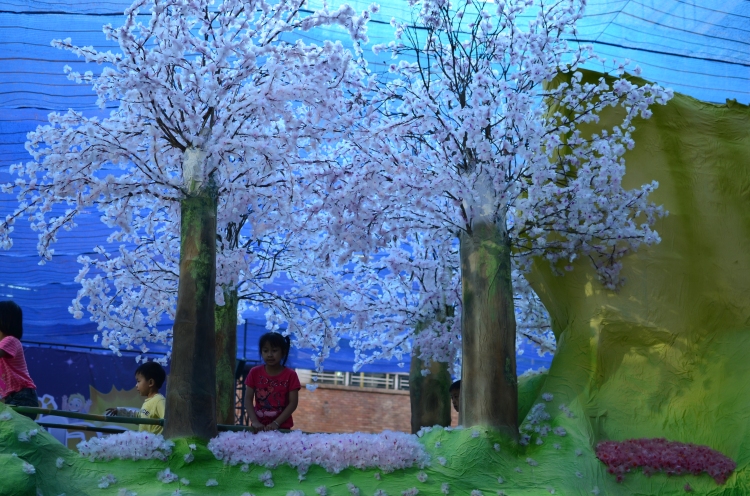 The whole place was kept eeirely blue under this blue canopy put up to keep the sun off. 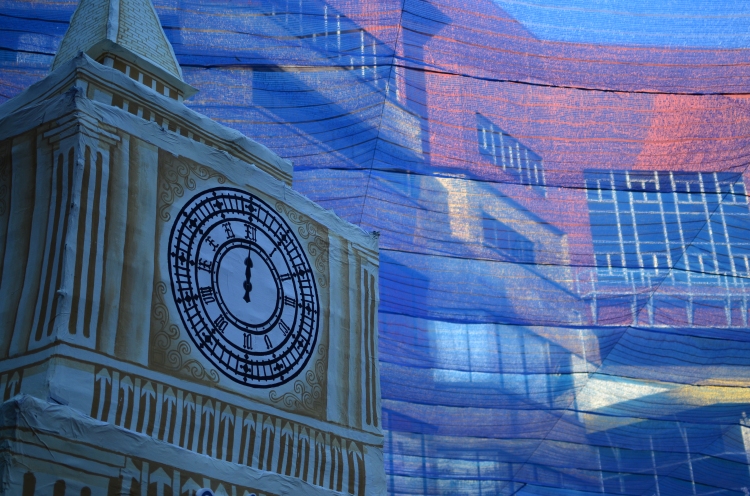 And of course I was full of kids just being kids. Which is always a blast to watch! 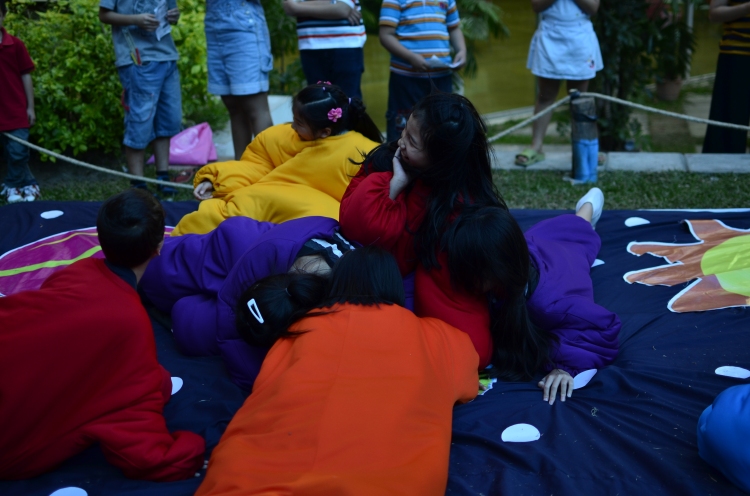 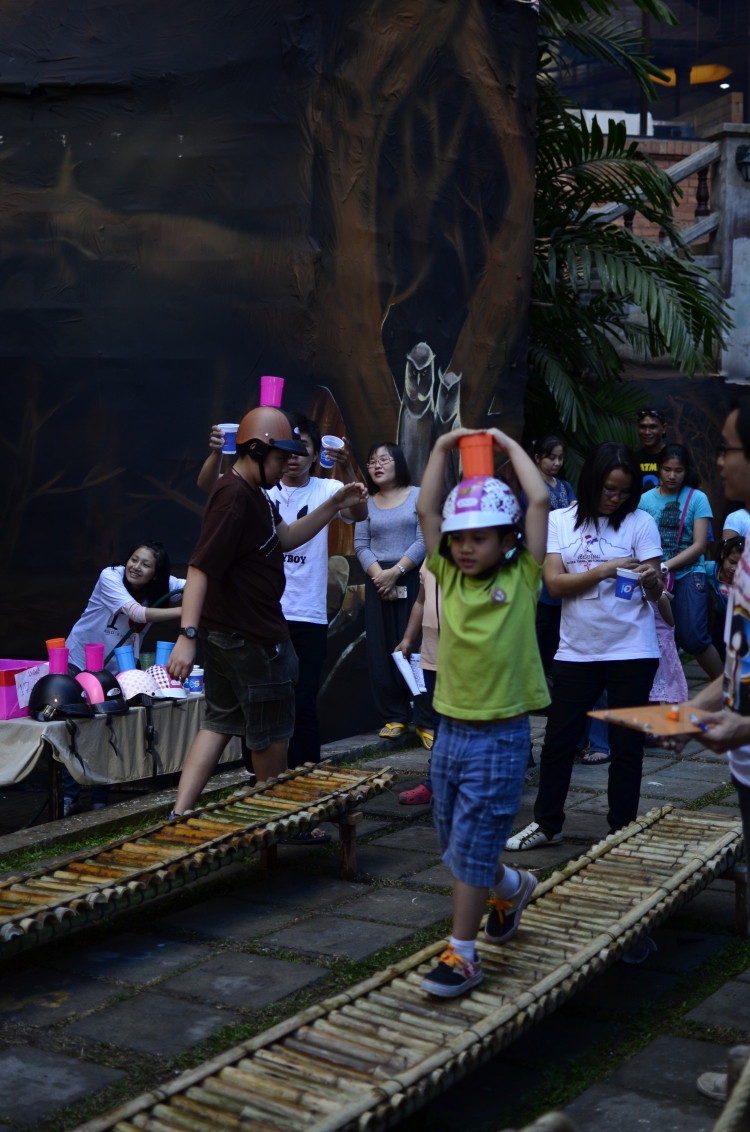 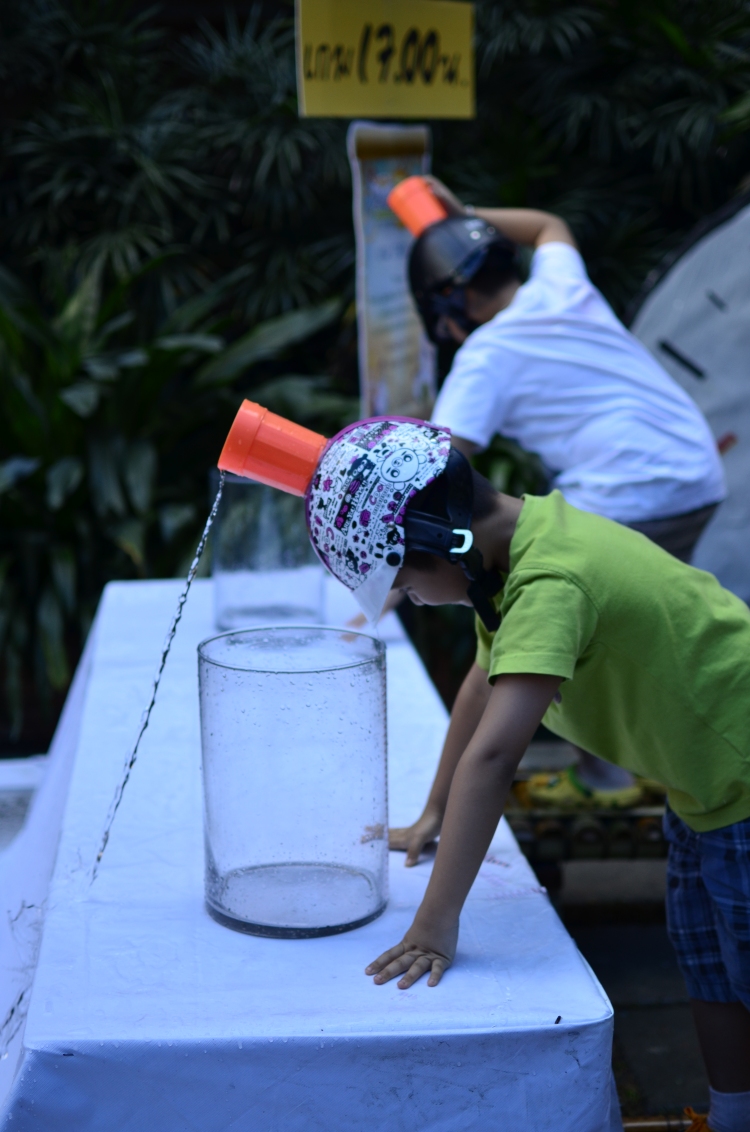 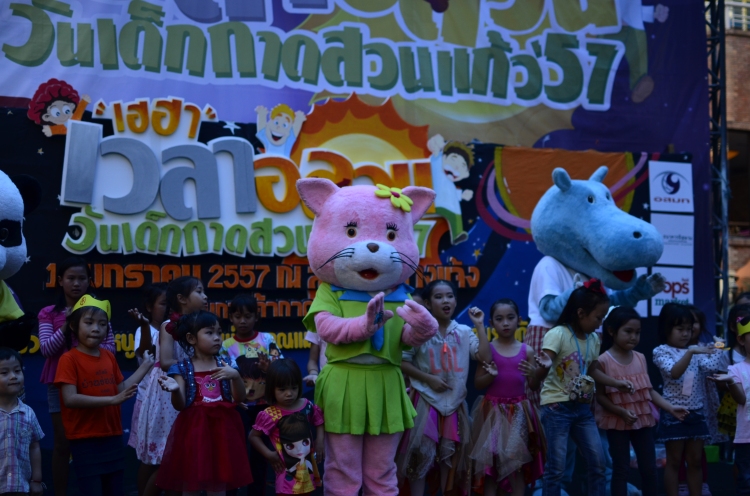 +1 made the wide choice and took a sideline seat to view the maddness. “Next year”, she said to me on the walk home, “I’m all over that shit”. The poor dote hasn’t realised she’ll have to pay for her own flights. 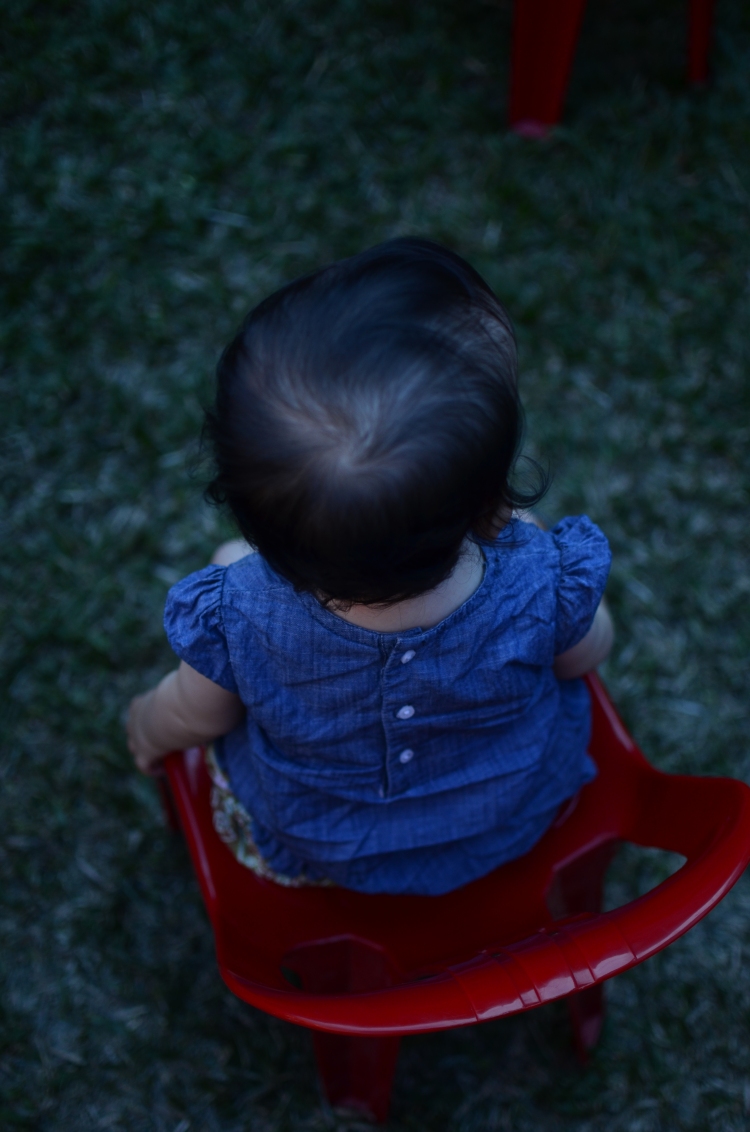 *As a bonus, here’s a youtube video I put together of a clatter of Vine efforts detailing +1’s day-to-day adventures in Chiang Mai. Lots of squeaking, sighing, and general cutery.

Recently I spoiled myself and paid for a pro flickr account so that I can take full advantage of the service. I take a lot of photos and I’m always looking for somewhere to put them, and with the limit flickr has on 200 hundred photos, it kind of forces you into paying eventually, that is if you don’t know another service that’s free (please don’t suggest one in the comments section until at least a year from now).

With this, I’ve began to go through my various folders of photographs which I never got around to organising and sifting through. These are photos I’d always meant to go through, but for whatever reason they got the old reliable and famed long-fingered treatment that is my modus operandi.

This set I’ve posted was from my second proper trip to Japan (I have taken one more overnight trip back in 2005), when myself and Herself travelled over at New Year for four days. It was kind of a Christmas surprise present for Herself, although she kind of knew she was getting it, as she had never been to Japan and we had been talking about it for years.

Despite a brief scare the night before we left because Herself was in the process of being knocked around by a serious dose of flu, I dragged her out of the bed and we drove to the airport and flew over to Osaka. Dodging the quarantine scanners that are a regular sight at Korean and Japanese airports, we eventually found our hotel where herself took a quick nap. When she woke up we went straight out to eat, and even though Herself was struggling we eventually found a sushi restaurant and began to make short work of the contents of the rotating plates. After a couple of huge pieces of jellied eel, Herself never felt better and we were ready to take on Osaka!

Via Flickr:
In December 2010, myself and my wife visited Osaka. We left Korea on December 31 and came back on January 3.

These are some of the photographs I took of the city.

Below are a couple of videos I have on youtube of my time there as well.

Another year of my life in Korea has passed. This March will mark the seven year anniversary of my first arrival in Korea. It seems like that long. That’s neither good nor bad; it’s just how I feel. If I look back on 2011 I can say that it has been a good year. As well as passing some milestones, it has been productive, it has been exciting, it has been tragic, and it has definitely strengthened my resolve to see things through in the future. But, I don’t really want to go on about how 2011 was when 2012 is here and happening now.

END_OF_DOCUMENT_TOKEN_TO_BE_REPLACED

I haven’t been as prolific here as of late. Had other stuff to write about. Not making excuses or apologising, I’m just saying, that’s all.

Anyway, there’s a course that I’m supposed to be doing. But, I seem to be not doing so much of it as I have been doing other stuff.

In January there will be an article from me in both Groove Magazine and 10 Magazine. There should also be two more articles again in both of these magazines for February.

For those who like to turn their nose up at the general quality of both of these (although Groove has been becoming a little more interesting lately) there could be something by me in The Three Wise Monkeys this Monday. I am expecting a mixed reaction from readers.

The big news for me though is that I had a small article posted on writing.ie where I talk about the importance of blogging for improving my writing. Writing.ie is a website for writers in Ireland that offers advice and tips on all aspects of writing. I quite chuffed with myself as the site is associated with UNESCO because of Dublin’s City of Literature status, and it’s also a national archive of sorts.

Keeping up the perseverance is starting to pay off.