When you live in Korea long enough expecting public holidays from home to fall on their usual day or date becomes a waste of time. Really. Anyone American will be familiar with Thanksgiving falling on a Saturday, and even the Superbowl the night after. Irish, like myself, are now most familiar with a Saturday Saint Patrick’s Day, and yesterday was no different from other years (except for last year and the year before when Paddy’s Day actually fell on the weekend…which kind of ruins my point), the day of Ireland and it’s ‘ness was transformed from its early weekday schedule to a much more alcoholic friendly Saturday.

And with that Seoul, and by Seoul I mean Guro-gu, and by Guro-gu I really just mean Sindorim, but it’s probably best to be accurate as well as honest and admit that it was a small park at Sindorim Station. 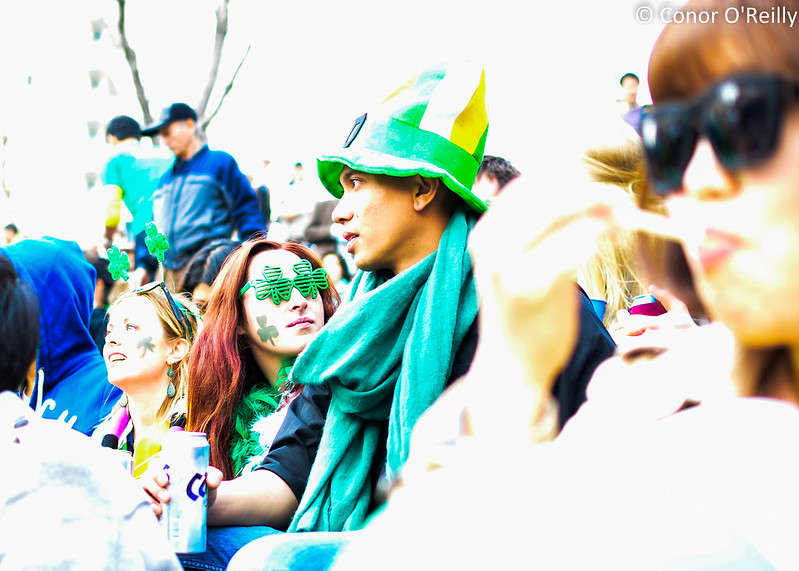 This years festival was as big as any before, and it may have been bigger. The open stage which was brought in last year has allowed for a wider festival space, allowing for crowds to fill the entire squre or plaza and swallow up and who naively attempted to pass through on their way too or from the subway. The removal of the big purple C4U beer tent was a welcome sight personally, although it was still lurking in the background cleaning up from the thirsty festivalers. I’d like to add that for all their generosity providing drinks to the thirsty, none of of this is reciprocated to the organisers who provide such a lively crowd. Sour grapes? Yes, but for a festival which always struggles for a source of finance you’d think a donation would be nice. Perhaps if the festival moved away then maybe they’d appreciate us more.

What about the rest of the festival though? There was a busy information area just above the escalators which seems to grow each year. The Seoul Gaels were en masse providing info, as were face painters, balloons, and new to the scene story tellers. It’s a good setup, as anyone who comes within view can’t miss the fact that something is happening, encouraging leisurely Saturday curiousity as well as providing a beacon those lost at sea in search of the infamous festivities.

And what of the festivities? Plenty of Seoulites indeed attened, and plenty of nationalities in the mix too. There has not been an overall majority of westerners at this festival for some years now, and while it’s a relatively even balance it’s always good to see a large number of Koreans of all ages in the crowd. Granted many are probably staring in wonder at the madness, but that’s not really what is important. 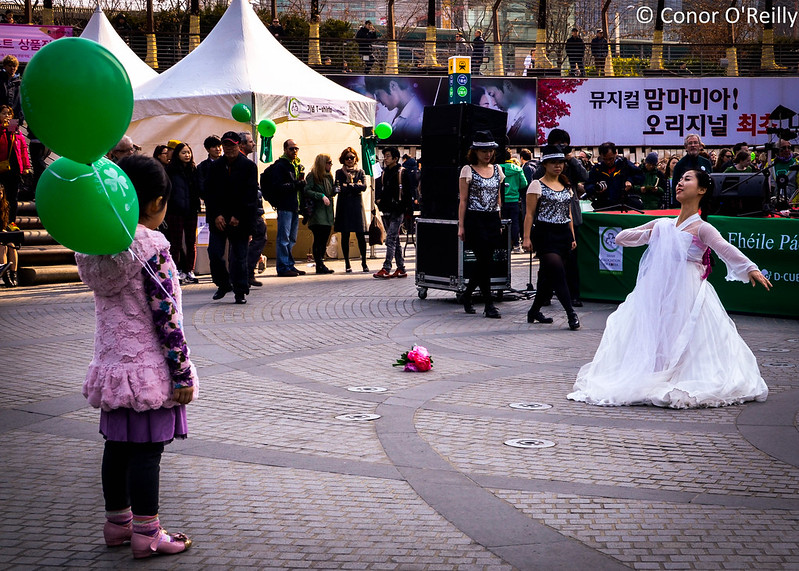 This year saw the return of many tried and tasted favourites such as Dara Sheahan, the dancers Tap Pung, Bard (the Korean Irish trad group), and another American military band, although those who I spoke to couldn’t be sure which one they actually were. There was also a band flown over from Shanghai called Boxty Rebellion, which was a big deal, I suppose. They played early though and the crowd really could have been drunker to enjoy them. From the pictures I saw after four o’clock things livened up to a more than typical level of manic.

With Herself and +1 in tow however, I decided that a calm and responsible exit was required. We bowed out not long after half past four, and from there we seemed to be banished to traffic as the rest of Seoul was, as usual, trying to go in the same direction.

Well done to all the organisers and the team of volunteers who worked hard to pull this one off. It was definitely a very professionaly run event that was suitable to everyone, from raving lunatics infested with beer, and young families (yes, I know, it was that good!). A fine feather in the cap of new IAK Chairma…woman Shauna Browne, and long may her good work continue. 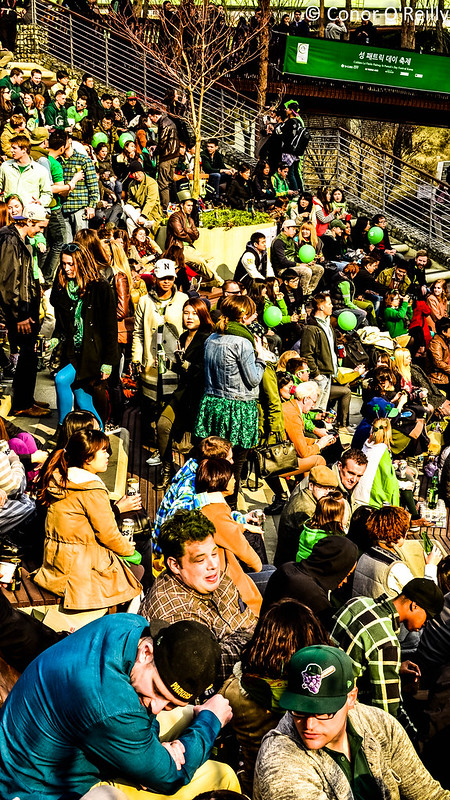 For more on the Saint Patrick’s Day festival in Seoul for 2014 visit iak.co.kr or check the facebook page, or on twitter (@irishinkorea or #paddysgotseoul).

Note: Author (me!) was chairman of the Irish Association of Korea from 2011-2013 in case you’re wondering why I may be biased.

Not for the first time, yours truly took to the stage with a completely new collection of poems to be read for the wonderful patrons of the Seoul Artists Network Open Mic in Itaewon, Seoul. This Sunday’s event took place in Tony’s Itaewon, which I wrote about reading in before. This time though was a typical SAN affair without the usual levels of debauchery.

When I First Heard Jazz

A Bunch of Grapes

Do I Look Good in This

You can watch more of my videos on my youtube channel, conzieinkorea.

I walked into the dark blue tinted room about thirty minutes late. There were around eight people in scattered groups of twos and threes talking in low voices but occasionally interacting familiarly with the rest of the people in the room.

The dark light was spotted with white glowing candle flames sitting on the tables spread evenly about the room. At the back there was a small bar with plenty of different bottles stacked up around it, and beside it a stage was laid out backed by a picture of a wide blue ocean scene warmly illuminated by a single spotlight centred on a single microphone.

I walked to a small table in the centre and put my bag down on a chair and walked straight to the bar and shook hands with its occupant, a short but long haired and bearded man wearing a black baseball cap.