This is a permanent collection. There’s a lot going on here. A lot of history. Not that many history books mind you.These shelves contain a few stories in the own right, not to mention so many memories of friends who have left Korea over the years. 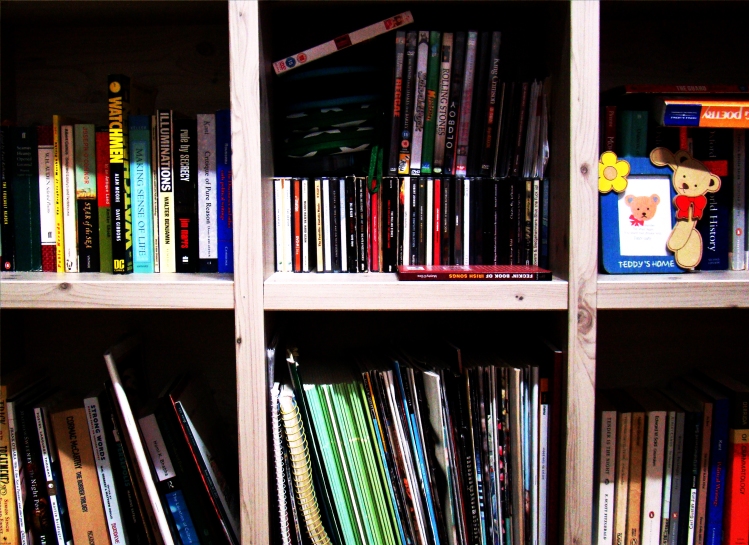 The most significant feature in my apartment is probably the bookshelf. It’s a tall double-rowed case five bays high, but we’ve pushed it down on its side and it functions now as a room longth mantle piece where our television and family pictures now sit. Each of the book shelf bays is full, although not completely with books.

END_OF_DOCUMENT_TOKEN_TO_BE_REPLACED

I do this kind of regularly…not as regularly as I like to talk about myself, which I’m going to do a lot about in this post.

I see a blog post that someone else has written and then change the contents and talk about myself. I think you call it a meme. The more I read blogs, what with the whole blogging that I do myself, the more I’m inclined to copy other people’s posts and give my own take on a particular topic. There were a few about Korea and particular articles that were poorly drafted and spoke poorly of the land of the morning calm (heaven forbid). The thing is, I’ve no idea how I managed to ever get into this because I hardly read any blogs about Korea, at least not intentionally (a few links pop up on twitter and give them an ould click and my five minutes, but only every so often, and I won’t go into why I don’t do this now)

END_OF_DOCUMENT_TOKEN_TO_BE_REPLACED

Neil Postman is famous in certain circles for his bites at modern culture, and in particular the media. Possibly his most famous book is Amusing Ourselves to Death: Public Discourse in the Age of Show Business. I recently finished this book after it was recommended to me by a friend, but before this I was kept reminded of a certain need to read it:

Postman, who died in 2003, published Amusing Ourselves to Death in 1985 the same year the Ronald Regan, a former actor becomes the president of the United States (remember Doc Brown in Back to the Future “Then tell me, “Future Boy”, who’s President in the United States in 1985? … Ronald Reagan? The actor? Then who’s VICE-President? Jerry Lewis? I suppose Jane Wyman is the First Lady!”), and celebrity power pulled together in its greatest show of force to raise funds for starving famine victims in Ethiopia in the famous event, LiveAid. Yes, these were the eighties and a time I remember mostly picking my nose and running around in fields for most of the summer, that is of course after I learned how to walk.