The green that creeps from beneath is a steady process. Warming the eyes along with the flawless blue of the sky with its cotton wool clouds. Blue and green, that is spring for me. It is without saying a relief to welcome the colourisation of the country after the death of everything in winter.

I can’t say that I would like spring as much as I did if I didn’t dislike winter. When I was in Korea it was the dry and arid air, the biting cold winds, and the white bright sunlight pitching rays constantly. Winter in Korea is a time when snow storms were a relief from the constant squinting.

For my first winter in Ireland I expected the long days of wind and rain, a grey and lifeless landscape, and the damp that seems to find everywhere. But it was the darkness which caught me off guard. The sun setting at four o’clock in the afternoon swallowed the evening in absolute night, and leaving myself, Herself, and +1 staring at each other at home, expecting something to happen.

Much like Korea, Ireland’s winter swallows up all the visible life. But for the crows hovering overhead, perfectly silhouetted in any weather but more so in the overcast of December and January, little signs of life persist. Waiting for the world to awaken after winter follows a similar pattern in Ireland and Korea. Snowdrops show first, white exaggerated in the damp mud of flowerbeds. Then the shoots of daffodils break through the earth.

In Korea at this time of year you can’t take a step left or right without seeing a cherry blossom tree blooming. Even in the most sun deprived thoroughfare hectic with traffic, a much desiccated looking tree will be blooming as resplendently as its excessively pruned bows will allow. I’ve always thought it to be a bit over the top.

Yet a few weeks ago I was driving into Dublin’s city centre and at Cabra Cross, just by the McDonalds and Tesco the traffic stopped. This is one of Dublin’s less dynamic traffic spots, and it certainly is not an attractive part of the city – but let’s not be too harsh as there are worse place to be stuck in traffic. I looked out the window, and much like those very deprived looking cherry blossoms, at the base of a tree were some frail and gutter mud splattered daffodils, attempting to be as resplendent as their situation allowed.

Now the daffodils are slowly dying off, but the trees have gradually been warming our eyes as first the hedges and now the trees start to green with spring. It’s not long after this that the dandelions come out, yellowing in a peppered splay across any grassy patch. A sure sign the warm weather has returned is dandelion seeds tumbling carelessly in the breeze of a sun splashed afternoon.

We call these piss-in-the-beds because if you pick one you will wet the bed, or so we were told as children. But I wonder would the dandelion be as common if it weren’t for children blowing their seeds at every opportunity.

I wake up early most mornings to the new sound of spring, as thousands of different noises come through to my room. Birds singing, mostly, but the leaves rustling in an April gust comes frequently enough. There’s also the silence of morning, something I can’t remember from Korea. Where no noise from the street permeates the walls, and looking out the window all I can do is really imagine the sound.

More so than before I appreciate my new domain in Ireland. The garden, green, and all the other colours it presents, and the breeze and the birds, it’s a long way from my old position watching for glimpses of life on the twentieth floor in Suwon. They are two different places, and nowhere can either be compared. Ask me if I prefer one, I’d probably prefer to not answer that but I would say that I’m happy where I am for now. All I need now is for someone to cut the grass for me…

So I won’t be along here much longer, so I thought I’d give this a shot.

There’s plenty about Korea that I’m going to miss, without a doubt, and then there’s a fair amount of things I won’t miss about Korea. It would be fair to say the same about anywhere, of course.

So here goes nothing…

Anything you’d miss and wouldn’t miss about Korea?

Spring has moved beyond it’s intial flex and is now well into the process of ejecting life from within the winter locked bowels of the plants and people longing for the seasons much anticipated warmth.

For me, without a doubt, the finest part of spring in Korea has to be its first couple of weeks as the first rain soaks and nourishes the earth, then the yellows of the forsythia and other plants slowly poke out in the yellow dusy haze. Before long the bushes on the streets begin to glow a warmer green, and the ever present cherry blossom trees have pre-bloom fur about their branches as the white petals rest just a few days from when they explode everywhere.

Did I mention the azaleas, which are the true jewel of the Korean spring?

It is this time when Korea’s spring is at its best, in my opinion. Yes, we all obssess over cherry blossoms (just spend a moment on my instagram page) because, well as impractical as they are, they are very nice to look at. However, before their emergence, this is when I find any extra skip in my step. The added warmth in the air makes this all the more easier.

Of course, it’s hard to resist arming myself with my camera on those short walks to work. Here’s a small set of some of the views on the way too and from work. 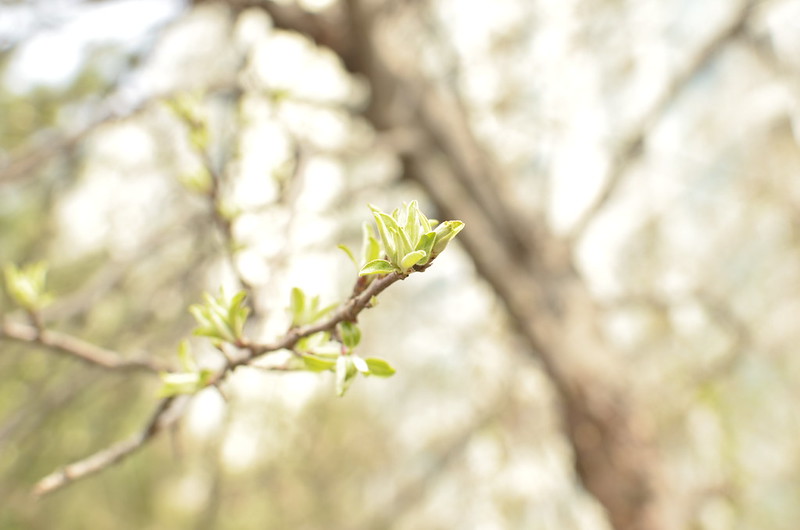 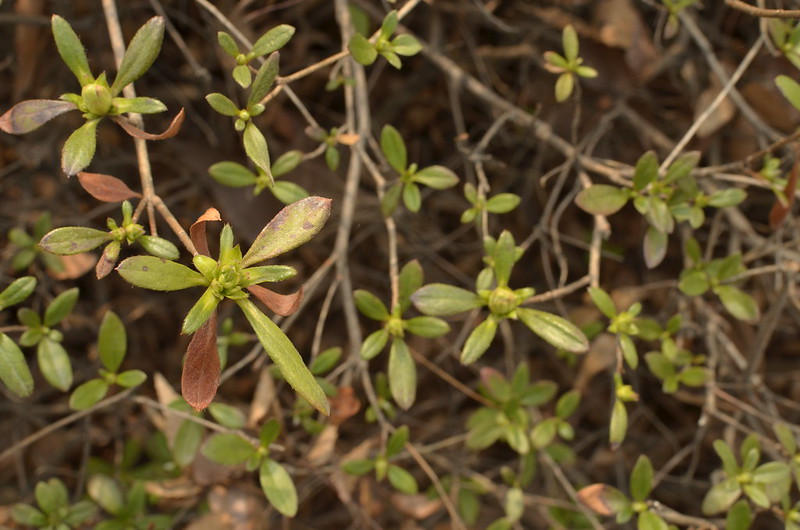 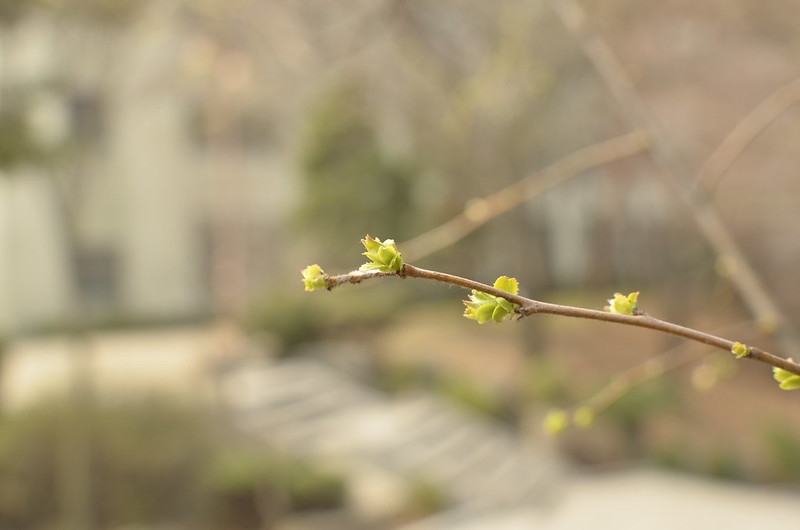 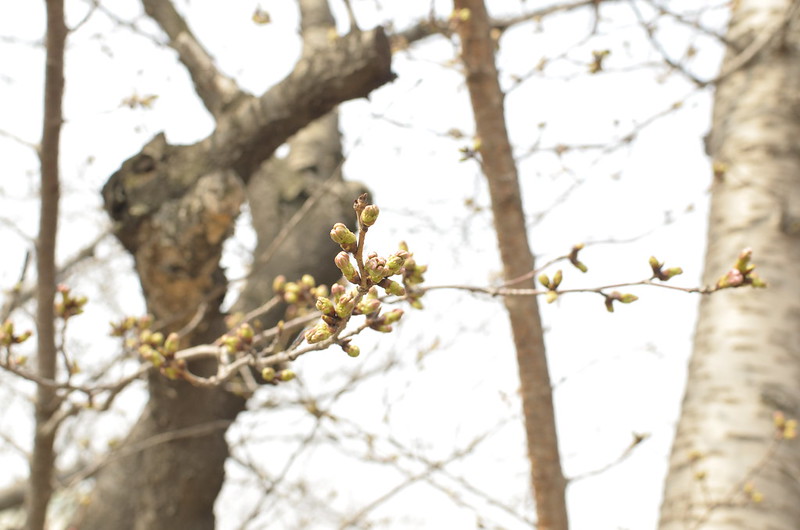 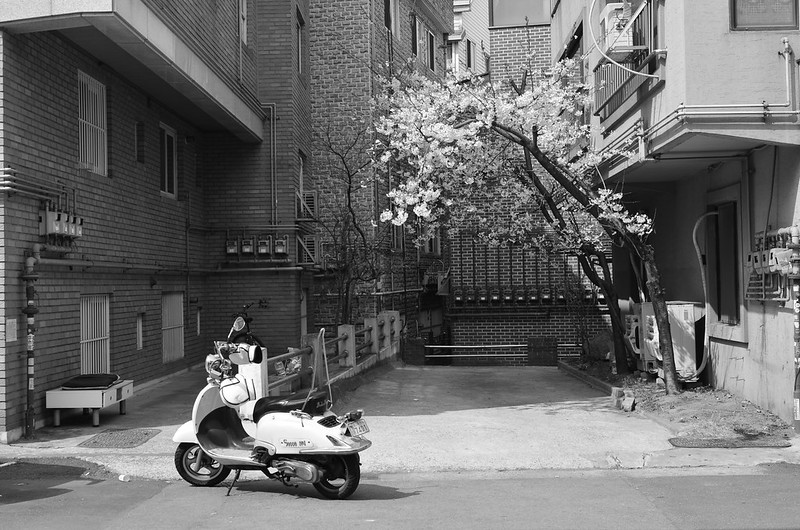 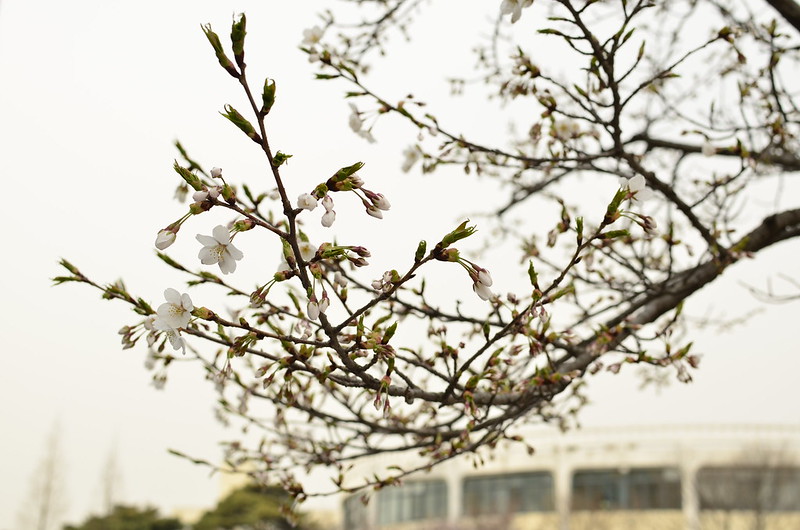 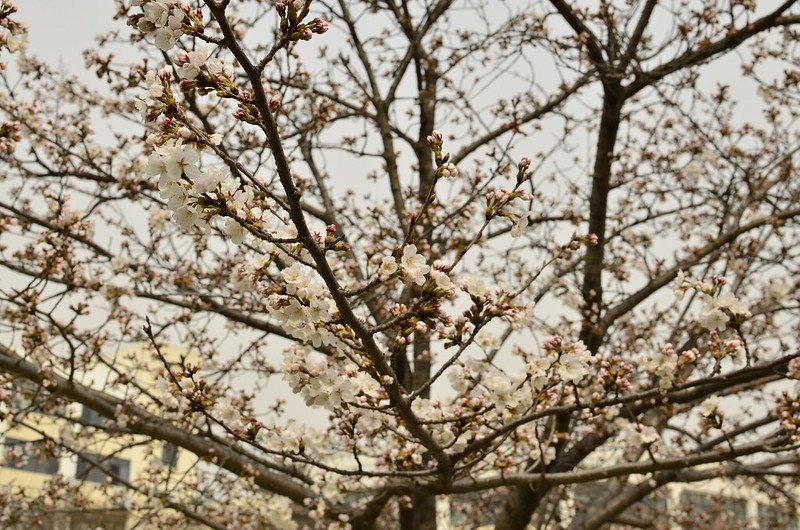 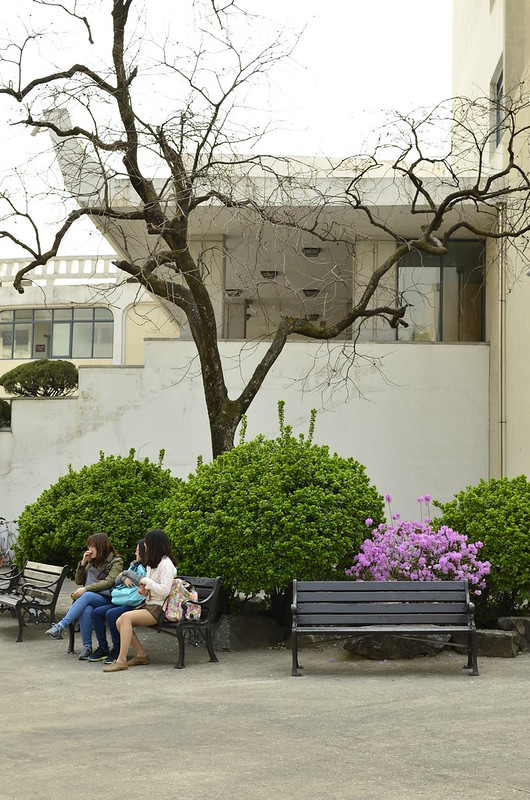 For more photography find me on Flickr, Tumblr, and Insatgram

It wouldn’t be a snow day in If I Had A Minute T0 Spare Towers if I didn’t have a stream of photographs of the lovely traffic jam inducing whiteness.

(Yes, I know I’m spoiling you)

The real fun begins tomorrow when all this is frozen, of course.

In a classroom I teach in the heating hasn’t been working since who knows when. It has probably been broken since the summer. It’s one of those awful heaters that doubles as an air-conditioner, blowing out dry, heated air, in the winter, and flimsy puffs of cool in summer. Yesterday, I was sitting at a desk rubbing my knees and grimacing one of those ‘oh well you know’ friendly kind of faces towards the students who came in wrapped for artic exploration. I actually felt sorry for them because at least I could stand up and walk around for a little warmth.

I turned to one student, who I knew had lived in the UK for several years and proclaimed ‘what we need here are some radiators!’ to which she gave me a blank look. I remonstrated with her, trying to job her memory to which she replied ‘I prefer undol’. And I thought, ‘oh yeah…but no…’

Of course if you’ve lived in Korea, or indeed merely visited, you’ll have experienced undol. It is the floor heating which exists in every home, many hotels, and indeed any restaurant where floor seating is the norm. It’s great, to be honest, to crawl into your home from the cold, kick of your shoes and glide across the sleek floor and then lie down in a warm cosy spot, defrosting with the undol’s loveliness caressing your bum.

I know Herself is a big fan of it, especially when there’s a nice big cosy blanket to wrap around herself. I would be inclined to blame it for what seems to be every Koreans’ outspoken aversion to anything cold (except iced lattes etc.). Can you blame anyone for liking the cold after probably spending every moment they don’t need to be outside sitting at home on the undol. In fact anything that isn’t undol in winter is in fact cold. I know this sounds like stereotyping, which I’m no fan of, but in this case it’s not necessarily a bad thing. To back me up all I need to do is look behind me at my wife currently engaging wholeheartedly with all that the undol has to offer.

I grew up with radiators, not undol. Radiators were, in winter, great. Why? They were warm. They radiated warmth. They were cosy, provided you didn’t touch one which was doubling as an soldering iron for some reason. Of course if they’re never turned on they’re not much good. Sure they leaked, stuff got stuck behind them, you burned your finger, and of course they had to be painted every so often. But then again so does a house.

So I’ve given one side of the story already. The cosy, slipping under the blanket in front of the TV, versus the burning your finger and laboriousness of radiators. It’s a clear winner, but really it isn’t because you can’t have undol everywhere.

Firstly, I wonder how effective undol would be in a two story house? Firstly there’s the pipes upstairs thing, and then there’s a space issue. How many square metres is your average apartment compared with your average house? Would it work? And if it did, how much would it cost?

Next, while I think taking your shoes off as you enter the home is a nice concept, it can be really annoying and impractical, such as in the hallway, or indeed in the kitchen. A good tiled floor would be much more useful. And then there’s the cultural element. The amount of time I’ve been chastised for even letting the tip of my shoe laden toe touch the linoleum, and all I can think of is, ‘chill the fuck out, if it bothers you that my toes touched the lino, give me a space bigger than a toilet cubicle to take off my bloody shoes in…’ It’s a little overkill. Yeah maybe I should be more vigilant with my size 11s, but come on, it’s a floor not a child’s bed.

Take my argument out of the home, which is where most people I discussed this point with seemed to think was the only place that needed heat.

Oh yes, I’ve opened up the argument to the rest of the world.

Floor heating really only works when you don’t have shoes on. Yes, heat does rise, but when you’re wearing shoes and socks and walking around what does it matter, you’re not really going to be in one place long enough to really appreciate the warm floor. And if you don’t have undol what are you going to do?

What we have ended up with is a world of heatless buildings that seem to have been designed with the idea that, well we can’t have undol, we can’t have anything. There is the odd portable heater, which never does the job, and don’t even get me started again on the hot air belchers. I know that these would probably work better if they rooms they were in were actually insulated.

I know, you’re asking yourself when did I become an expert on construction materials and heating. Well, since I’ve froze my ass off every winter since 2005, I’ve decided I’m an expert.

Back to the point. Undol is lovely, but radiators, yes please! Or even better, lets knock a fireplace into every wall like there should be.

P.S. I say all this with my sockless toes all cosy and warm lodged on a warm patch on the floor.